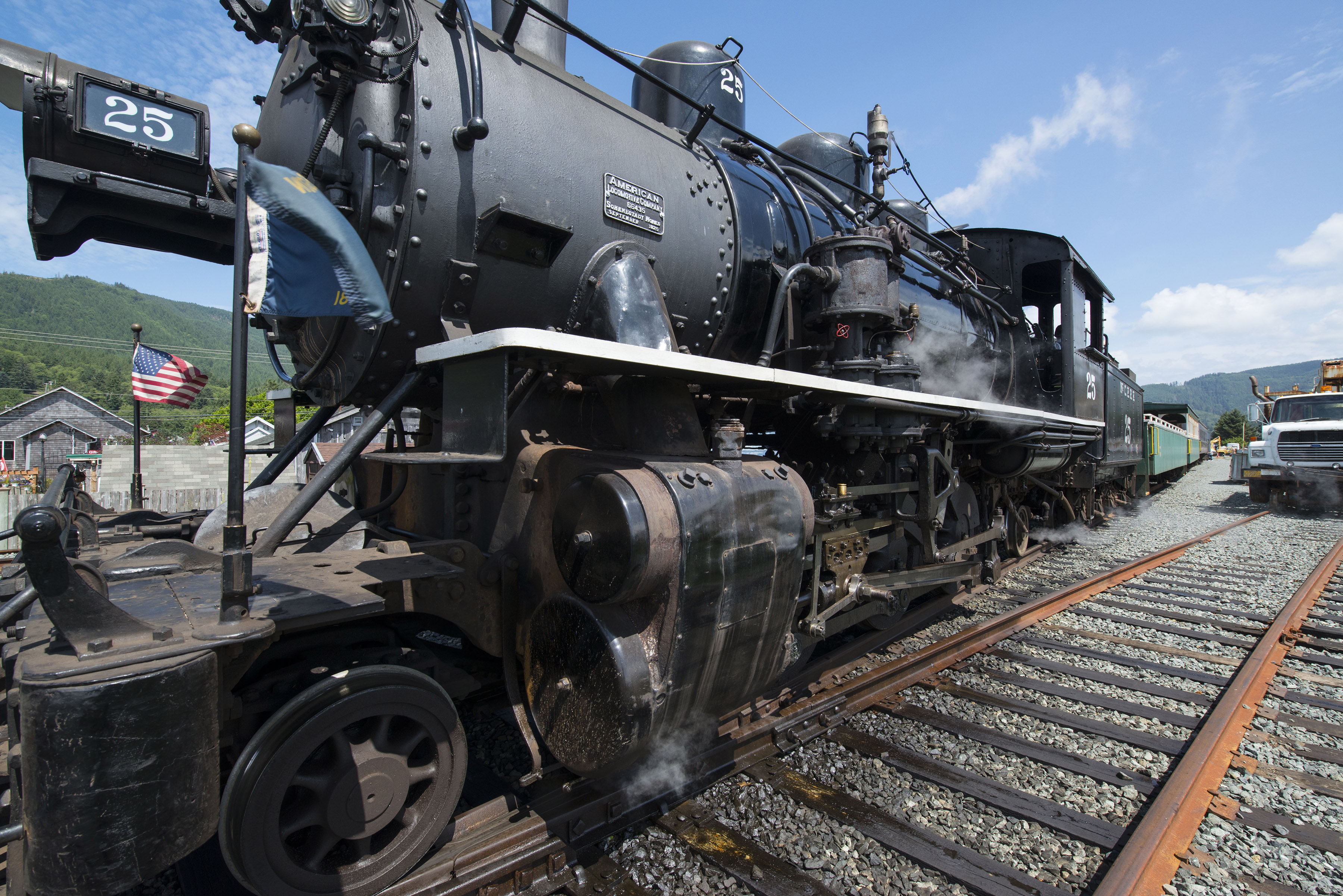 Founded in 2003, the Oregon Coast Scenic Railroad is a section of the old Port of Tillamook Bay railroad line that extends the Tillamook Air Museum through Garibaldi, Rockaway Beach, and Wheeler. Offering regular excursions between Garibaldi and Rockaway Beach, sunset trails, and special excursions during the fall and the holidays, the scenic railway showcases the rugged Oregon coastline, a historic railway, and beautiful ocean views in a family-friendly atmosphere among Oregon’s quaint coast towns.

Among several locomotives currently being operated by the Oregon Coast Scenic Railroad, the train is powered by two historic steam locomotives repurposed from their use in Oregon’s logging industry. Steam locomotives are powered by recycled motor oil sourced from the waste oil of automobiles and trucks. Those with the gumption to sit near the front of the train may find themselves learning about the history of the locomotives or entertained by stories from Oregon coast locals. In fact, the railroad offers special tickets that allow passengers to ride in the cab of the locomotives.

The cost of a ticket ranges from $12 for children to $20 for adults. Seniors older than 62 and veterans with a military ID can take advantage of a discounted rate, and children under three years old ride free. Cab rides, which are limited to two seats per trip, cost $52. Regularly scheduled trains have a 30 minute layover, but the trains keep a tight schedule, so be sure to listen for the whistle five minutes before the train is set to depart.

The Port of Tillamook Bay Railroad extends from Hillsboro, Oregon to the Port of Tillamook and crosses the Coast Range via the Salmonberry Canyon. An active railroad until 2007, one of the worst winter storms on record, the Great Coastal Gale of 2007, brought heavy rains and steady 129-mile-per-hour winds on the Oregon coast, provoking the National Weather Service to issue its first-ever hurricane-force wind warning for the region. The storm destroyed parts of the railroad, and though some have braved the destruction on foot, most of the railroad remains closed—for now. The Oregon Coast Scenic Railroad has plans in place to reopen sections of the railroad. The section in operation is in full repair.

The railroad is also now a part of the immersive Tillamook Bay Heritage Route.

Note: The Oregon Coast Scenic Railroad only runs daily trips during the summer months, from mid-June to Labor Day weekend. Weekend services begins Memorial Day weekend and stops the last weekend of September. Trips depart from Garibaldi at 10 a.m., 12 p.m. and 2 p.m., and depart from Rockaway Beach at 11 a.m. and 1 p.m. A round-trip excursion takes roughly 1.5 hours. More, dogs are permitted in the open-air rail car. Tickets are purchased in the caboose. Call 1.888.718.4253 for more details.