Film nerds know the particular thrill of locating the exact spot where a scene from a favorite movie was made. The Oregon Coast has a rich and interesting history as a favorite destination for filmmakers, with over 450 feature films and television shows made here from 1909’s The Fisherman’s Bride to 2020’s Pig and Metal Lords.

Here are a few key coastal spots for film fans to geek out over along the Oregon Film Trail. 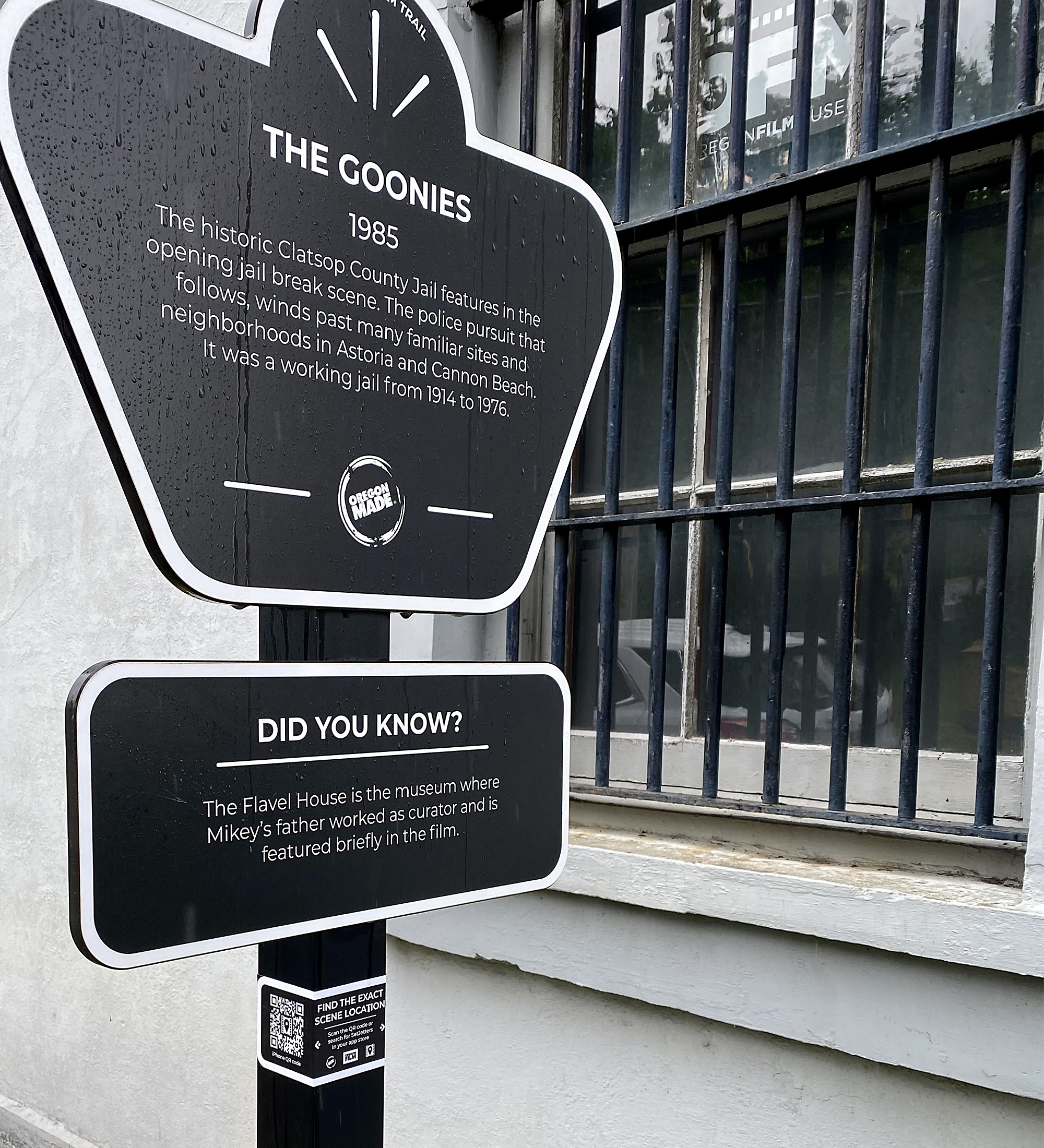 A great place to start is at the Oregon Film Museum, where a sign for The Goonies marks the spot of the jailbreak in the opening scene. It also notes the role of the Flavel House Museum (next door) in the film, where one of the characters works as a curator. You’ll find a wealth of film-buff info for the whole family at the jam-packed interactive museum, complete with a green screen experience, pretend jailhouse, memorabilia-filled Goonie Gallery, place to make and edit your own film, and a spot to create your own mugshot to add to their gallery of prisoners.

Continue about two miles east to the East End Mooring Basin (at the east end of the Astoria Riverfront Trail), where a sign marks a viewpoint of the house where The Goonies was filmed. The sign also marks John Jacob Astor Elementary School, just two blocks uphill, used for the exterior shots in Kindergarten Cop. Fun fact: After filming Kindergarten Cop, the crew installed the playground equipment and hired local artists to paint murals on the school building.

Travel two and a half miles west to Alameda Park, under the Astoria-Megler Bridge, where a sign marks the part of Short Circuit where the robot, Number 5, escapes and falls from the bridge. It’s one of many times the bridge has appeared on the big screen; another was in the 1983 film The Night the Bridge Fell Down. 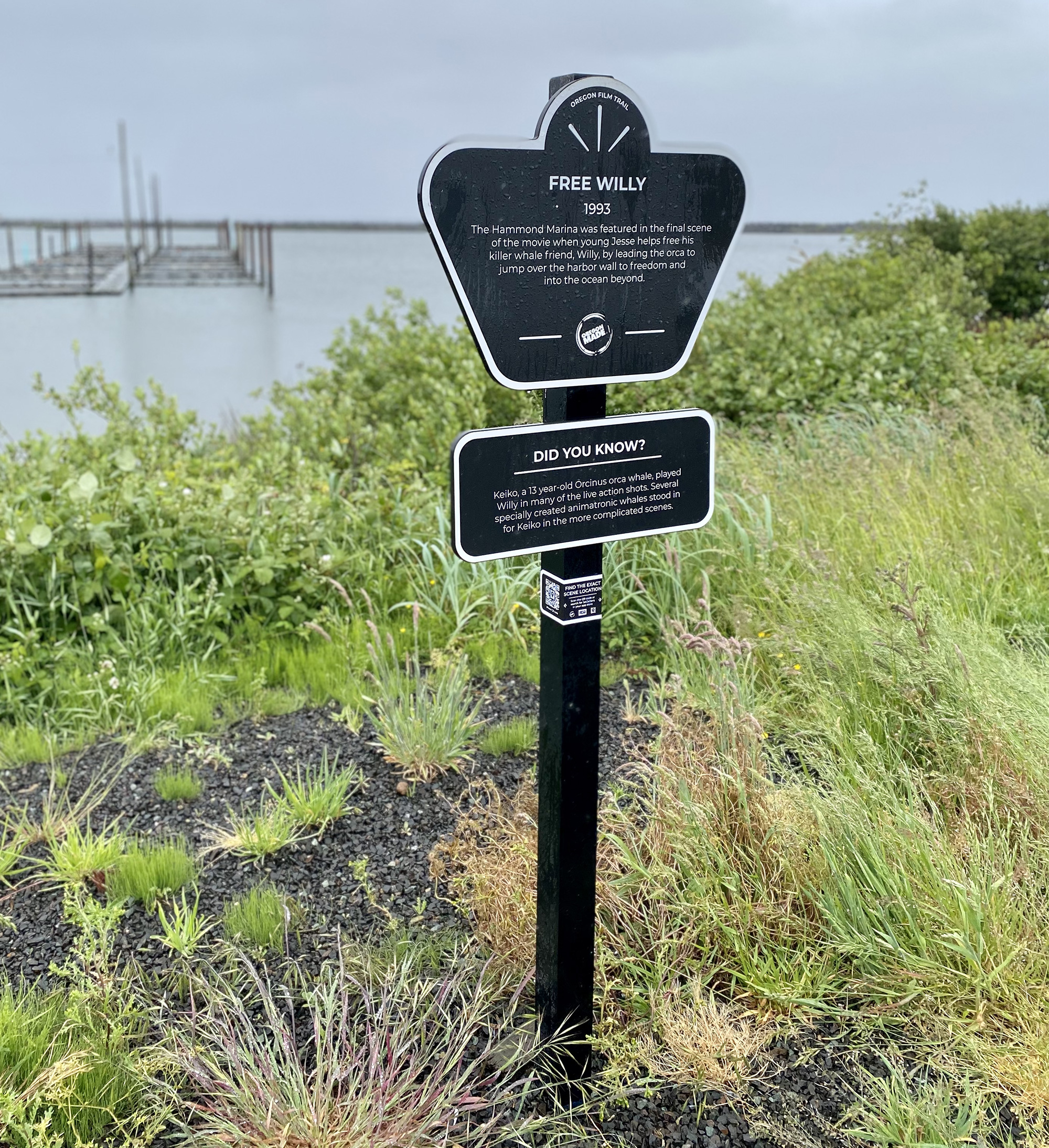 Visit the Hammond Marina, just west of Astoria, to imagine the sight of Willy the orca jumping to the open sea in Free Willy. The filmmakers used special animatronic whales to stand in for Keiko the whale during some of the more complicated scenes. 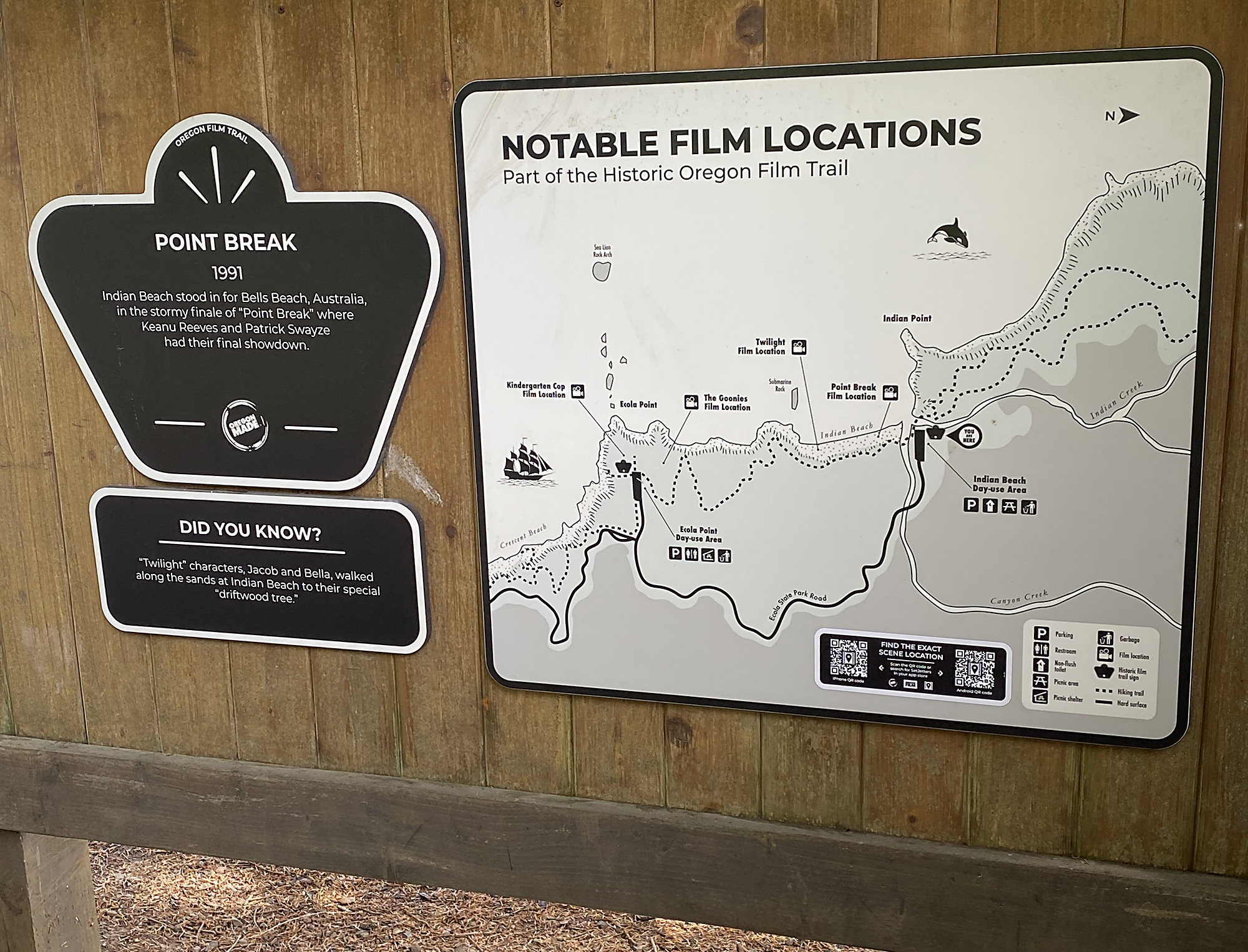 Ecola Point at Ecola State Park is now home to two signs that commemorate four fan-favorite flicks: Point Break, Twilight, Kindergarten Cop and The Goonies. Make the breathtaking 6.5-mile hike to Indian Beach to see the unforgettable end-scene location of Point Break, as Patrick Swayze and Keanu Reeves fight in a rainstorm before Swayze heads off into the surf.

The classic Sometimes a Great Notion was filmed on beaches and at a house on the Siletz River a few miles away from Gleneden Beach State Recreation Site. Based on Oregon son Ken Kesey’s novel of the same name, the 1971 flick starred Paul Newman and was filmed in the coastal towns of Kernville, Toledo and Newport as well as the Columbia Gorge. One of the first film trail signs was installed here in Gleneden–and then subsequently stolen from here as well. You can still see the 50 Sitka Spruce, Western Red Cedar, Douglas-fir, and Western Hemlock seedlings planted in 2018 by The Oregon Film Office and Oregon State Parks planted at the site to mark the 50th anniversary of the Oregon Film Office and its long standing collaboration with Oregon State Parks. Sometimes a Great Notion was the second novel by Oregon author Ken Kesey and was published in 1964. 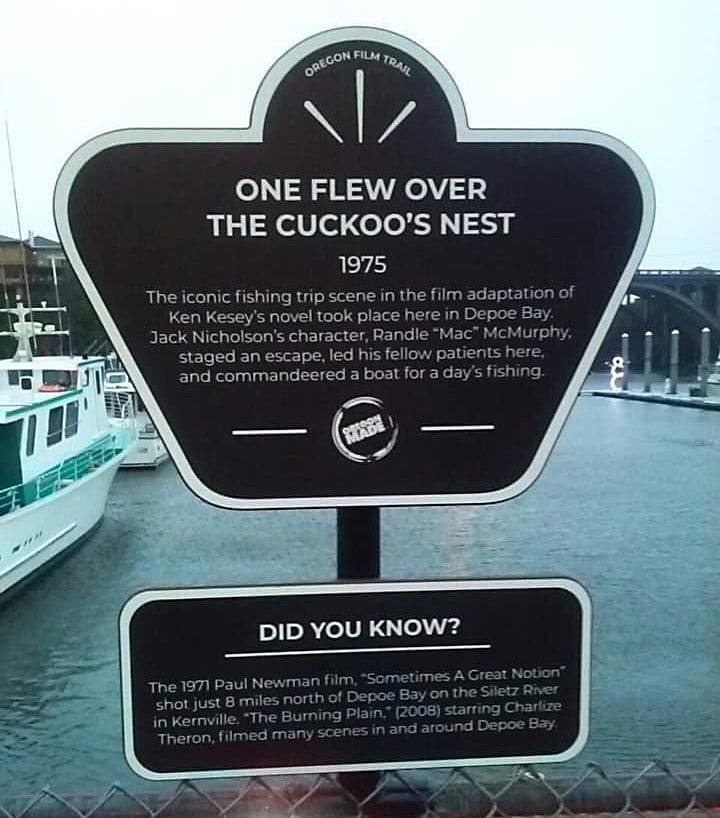 Depoe Bay Harbor had a starring role as a location in One Flew Over The Cuckoo’s Nest, based on another Ken Kesey novel. This sign on the Oregon Film Trail, located in the World’s Smallest Harbor between dock 1 and 2, represents the film, made in 1975 and starring Jack Nicholson and Louise Fletcher. The harbor was featured prominently in the film when Jack Nicholson’s character, Randle “Mac” McMurphy, staged an escape from the hospital and led his fellow patients to the harbor, where they commandeered a fishing boat and took it out for a day’s fishing. Dockside Charters provided the boat for the film when it was shot in March 1975.

The movie was also filmed in Salem, where visitors to the Oregon State Hospital Museum of Mental Health will see more exhibits about the film.

Toledo was another filming site for Sometimes A Great Notion (1971). The film was directed by Paul Newman, who also co-starred with Henry Fonda and Lee Remick. Longtime residents to Lincoln County remember the filming period well, as many antics ensued while cast and crew were in the region.

The Oregon Film Trail (through Oregon Film, and the Oregon Made Creative Foundation) has partnered with SetJetters, a mobile app that maps film locations and allows the user to search where their favorite movies were filmed, navigate to the location, and recreate movie moments.

How to find the Oregon Film Trail and SetJetters

On every Oregon Film Trail marker across the state, look for a QR code that allows you to download the app on your smartphone to find the exact scene locations nearby.