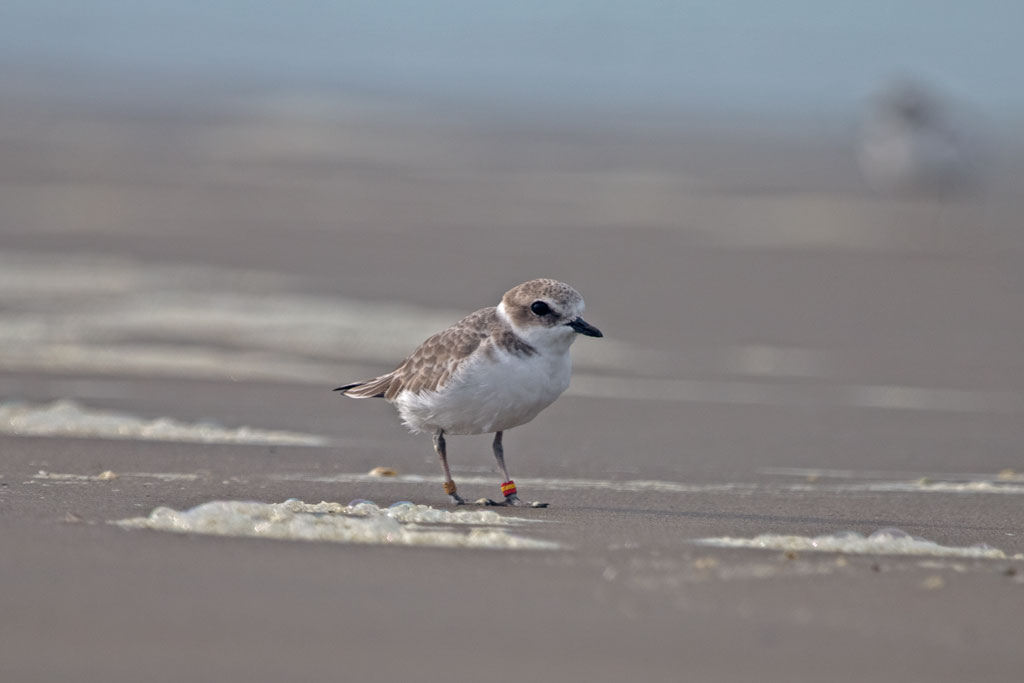 The Pacific Coast population of the western snowy plover (Charadrius nivosus nivosus) ranges from southern Washington all the way to Baja California, according to the U.S. Fish and Wildlife Service (USFWS). Oregon holds a particularly tenacious group, and thanks to management efforts and Oregonian’s protection, this population has been steadily growing. In fact, Oregon plovers immigrate to other states and boost the populations there! Currently there are approximately 363 breeding adults found on Oregon’s beautiful coast. Federally listed as threatened in 1993, this special bird requires particular protection and respect from beach goers.

The western snowy plover is a tiny shorebird about the size of a sparrow with rather long legs and a short, squat neck. A starched white underbelly contrasts with a pale tan back. Dark patches mark the sides of the neck, reaching around onto the tops of their chests. Juveniles can be distinguished from non-breeding adults by scaly pale edging on their back feathers, according to USFWS.

Western snowy plovers can be found on shores, estuaries, river mouths, and offshore islands along the coastline. They create their nests by making a scrape directly in the sand, and they sometimes decorate their nests with shells, rocks, kelp, or other detritus. Their tiny eggs are camouflaged to look like sand. The birds’ preference for sandy coastal beaches and dry mudflats make Oregon’s coastline a perfect place for them to breed and raise young. Unlike more common shorebirds like sanderlings, these birds rely on sight to forage for invertebrates above ground, rather than probing the sand and mud for food.

Snowy plover chicks leave the nest within hours after hatching to search for food, according to Oregon Department of Fish and Wildlife (ODFW). Chicks aren’t able to fly for approximately four weeks after hatching, and during this time they are especially vulnerable to predation. Adult plovers do not feed their chicks, but rather lead them to suitable feeding areas. Adults use distraction displays to lure predators and people away from chicks, and adult plovers use calls to signal the chicks to crouch when in danger. They may also lead chicks, especially larger ones, away from predators. Most chick mortality occurs within six days after hatching.

While the western snowy plover has many natural predators like owls, raccoons, and falcons, humans create another set of risks, particularly for breeding birds. Beach visitors ride bikes, walk their dogs, fly kites, and even drive their vehicles out onto the sand. For small birds that need to conserve their energy, each disturbance causes stress to the animal and can cause females to abandon their nests altogether. Abandoned nests place the already delicate population at further risk, decreasing the number of successful hatches for the year.

During the breeding season between March 15 and September 15, select dry sand beach areas in Oregon are closed to human entry to help protect plovers during the critical nesting season. Of the eight nesting sites in Oregon, three occur on the Siuslaw National Forest and the Oregon Dunes National Recreation Area. Several land managers oversee beach activity for plover protection, particularly the U.S. Forest Service (USFS), the Bureau of Land Management (BLM) and Oregon Parks and Recreation Department (OPRD). Each year these agencies install signs and site-specific information and may build nesting exclosures (mesh fences that surround a nest and act to keep out predators) to protect the fragile eggs.

In addition to recreation restrictions, state and federal partners also work to restore habitat in areas with a history of plover use. Habitat restoration includes removing European beachgrass, leveling steep dunes that formed as a result of beachgrass introduction, and placing shell material in areas selected to provide high quality nesting habitat with minimal beach use conflicts. Predator management in the form of nest exclosures and trapping and removing predators that specifically target plovers such as ravens, crows, and foxes are also management tools. The Oregon Biodiversity Information Center (and previously, The Nature Conservancy) has been monitoring plover reproduction and survival since 1990.

What You Can Do To Help