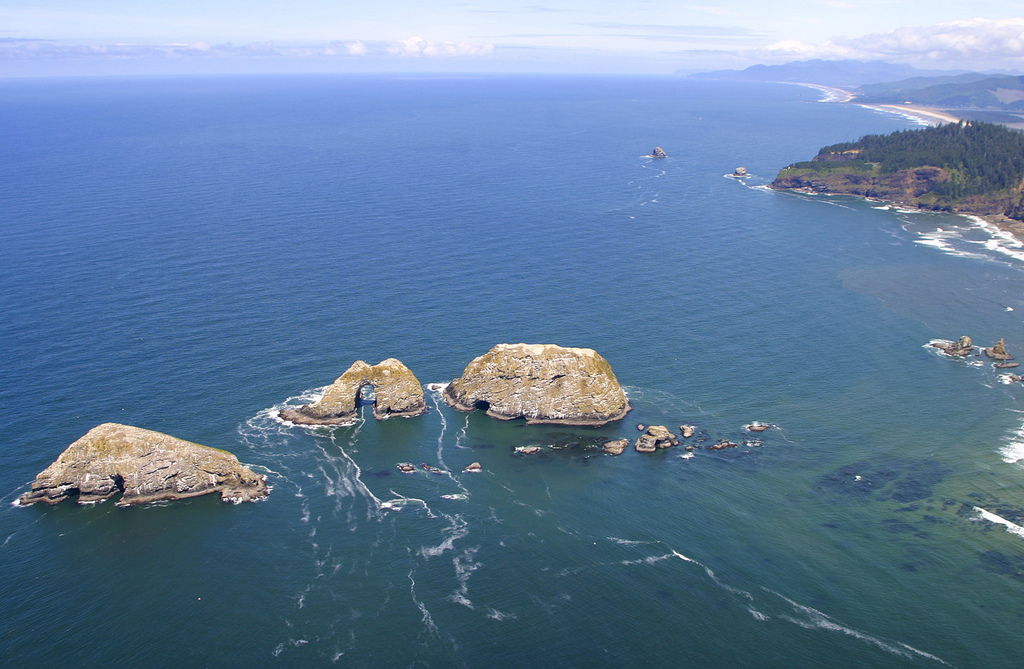 This story is provided courtesy of the U.S. Fish and Wildlife Service.

Every summer the Oregon Coast National Wildlife Refuge Complex conducts aerial surveys of breeding birds at seabird colonies along the Oregon coast. This project provides valuable data to both Migratory Bird and National Wildlife Refuge programs within the U.S. Fish and Wildlife Service, as both seek to understand and manage the many seabird species that are an integral part of the Pacific Northwest coast.

May and June are when common murres, which spend most of their lives at sea, return to lay a single egg on the coastal islands and sea stacks. By August, the parents and young murres are headed back to their lives at sea. Each year, biologists working for the U.S. Fish and Wildlife Service fly the entire coast of Oregon, photographing seabird colonies of common murres and cormorants from a helicopter at a high altitude. Shawn Stephensen, a biologist with the U.S. Fish and Wildlife Service, spends a couple of days a year leaning out of a helicopter, taking pictures of the birds. The free-standing rocks and islands provide seabirds with protection from land predators like skunks and coyotes; however, raccoons can still swim out to islands to prey on nesting seabirds! The islands are close to food sources for murres, which dive up to 500 feet in search of small fishes like sandlance, herring, smelt and juvenile rockfish. Pelagic, Brandt’s, and double-crested cormorants also nest on the rocks and islands. The cormorants are also piscivorous (fish-eaters) and dive to capture their prey. The isolated colonies are good for the seabirds, but their location makes counting them only possible from the air.

When he’s taking pictures, Stephensen knows the days will be long. He spends 10 to 12 hours in a helicopter with its doors removed, a four-point harness holding him safely in place and a digital camera firmly in hand (and strapped around his neck!). Some days are really warm, and other days the cold wind off the ocean can leave his fingers numb as he holds the camera up to his face for hours on end. Despite the safety helmet he wears, the loud noise of the helicopter blades seems relentless. Stephensen is not alone, though; the pilot and another photographer are there with him, all concentrating on the task at hand.

The days after the helicopter ride are even longer. Stephensen will be responsible for cataloging the photos and matching the photographs with each seabird colony on the coast. Each colony has a specific identification number. Some of the smallest surface-nesting colonies only have two to four birds, while the largest, at Yaquina Head, may have up to 90,000 murres. The two photographers take pictures from different angles; the person in front takes close ups and the person in the back takes distance shots. This makes it easier to catalog and reconcile the pictures.  “We spend two days in the helicopter,” Stephensen said, “and at the end of them, we have between 5,000 and 6,000 photos of the seabird colonies along the Oregon coast.”  Fortunately, they use the GPS (Global Positioning System) readings from the helicopter flight, which tracks latitude and longitude every three seconds. Later, they are able to match the time stamp from each photo with the helicopter’s flight path.

“Once we have all the photos assigned to the right colony, we pick the best photo to count. Sometimes we stitch the photos together to make sure the whole colony is covered.” said Shawn. Then he uploads the files using GIS (Geographic Information System) software, which displays the photo on the computer screen. Using his mouse, he marks each bird with a dot, and then the computer counts the dots. Because he’s counting different species, Stephensen uses yellow dots for murres and bigger, green ones for Brandt’s Cormorants. It requires a lot of patience to make sure each bird is dotted, and often he takes breaks to let his eyes rest. Sometimes, Stephensen even dreams about counting birds. Every murre counts!

In the past, Shawn used slide film and would have to load a roll of film into the camera after every 36 pictures. Once the slides were developed he would project them onto a wall and hand-paint the dots on the birds, turn off the slides, then count all the dots by hand. This all changed in 2009 with improving technology. Digital cameras and computers have made counting seabirds much faster and more accurate. He can take up to 1,500 photos before replacing the memory card in the camera, and the computer can count the dots much faster than he can.

How Data Is Used

From these photographs, biologists count the surface-nesting birds and estimate the breeding populations of the birds, all of which nest on the flat or sloping surfaces of these free-standing rocks and islands. This data is entered into the Oregon Seabird Colony Database, which helps identify the current distribution and abundance of common murres and cormorants at colonies on the Oregon coast. These counts are part of a large historical data set that goes back to the early 20th century. This means there is more than 110 years of information about seabirds in Oregon, although it wasn’t until the 1980s that we developed the survey methods still used today. As a comparison, in Alaska, there are seabird counts dating from the 1880s.

This information helps biologists understand trends and changes to seabird populations over time, which in turn helps us understand the marine environment at large. Seabirds are very sensitive to changes in food supply and sea temperature, and they can be easier to study than other oceanic species. This makes them a good indicator species for marine health. Biologists can use this information to assess the effects of disruptions such as climate change, lights, noise and other disturbances on Oregon’s seabirds. The distribution of nesting common murres has changed along the Oregon coast in recent years—increasing in some locations and decreasing in others—and these annual surveys have helped to track these changes.

Stephensen says that his information also feeds into an international database. “We send the data to a larger database from Oregon, Alaska, Russia and Japan and see it at seabirds.net so that we can see what’s happening to seabirds around the Pacific. To have it all in one location is a great resource for everybody.”

Are you interested in seeing and counting the birds for yourself? The colonies at Yaquina Head, located just north of Newport, are easily observable, and it is a great place to witness the action first hand. An observation deck and spotting scopes provided by the Bureau of Land Management (BLM) are available at Yaquina Head Outstanding Natural Area. BLM manages the headland and USFWS manages the offshore rocks, reefs, and islands that are part of the Oregon Islands National Wildlife Refuge.

From its start in 1903, the National Wildlife Refuge System has owed its very existence to concerned citizens eager to protect America’s natural resources.

More than 200 nonprofit Refuge Friends Group organizations support national wildlife refuges, whether they work with a single refuge, a refuge complex or an entire state. Friends members are crucial to conserving and protecting our nation’s wildlife and teaching millions of Americans that their actions today determine the conservation legacy of tomorrow.

Friends of the Oregon Islands National Wildlife Refuge include:

More than 42,000 people volunteer their time and ideas each year to the U.S. Fish and Wildlife Service. Whether they work on the land, in a visitor center, or with youth, they contribute to the conservation mission that reaches back more than a century. Consider becoming a volunteer to contribute on behalf of America’s natural resources.