Seabirds spend most of their lives in the open ocean and have special adaptations to survive this cold and wet environment. Thick, waterproof feathers keep them warm; a special gland near their eye removes excess salt from their bodies; sharp, pointed beaks catch and hold slippery fish and other aquatic quarry; strong, pointed wings help some seabirds “fly” underwater; and webbed feet propel them efficiently toward their prey. Below are some notable species found along the Oregon coast. 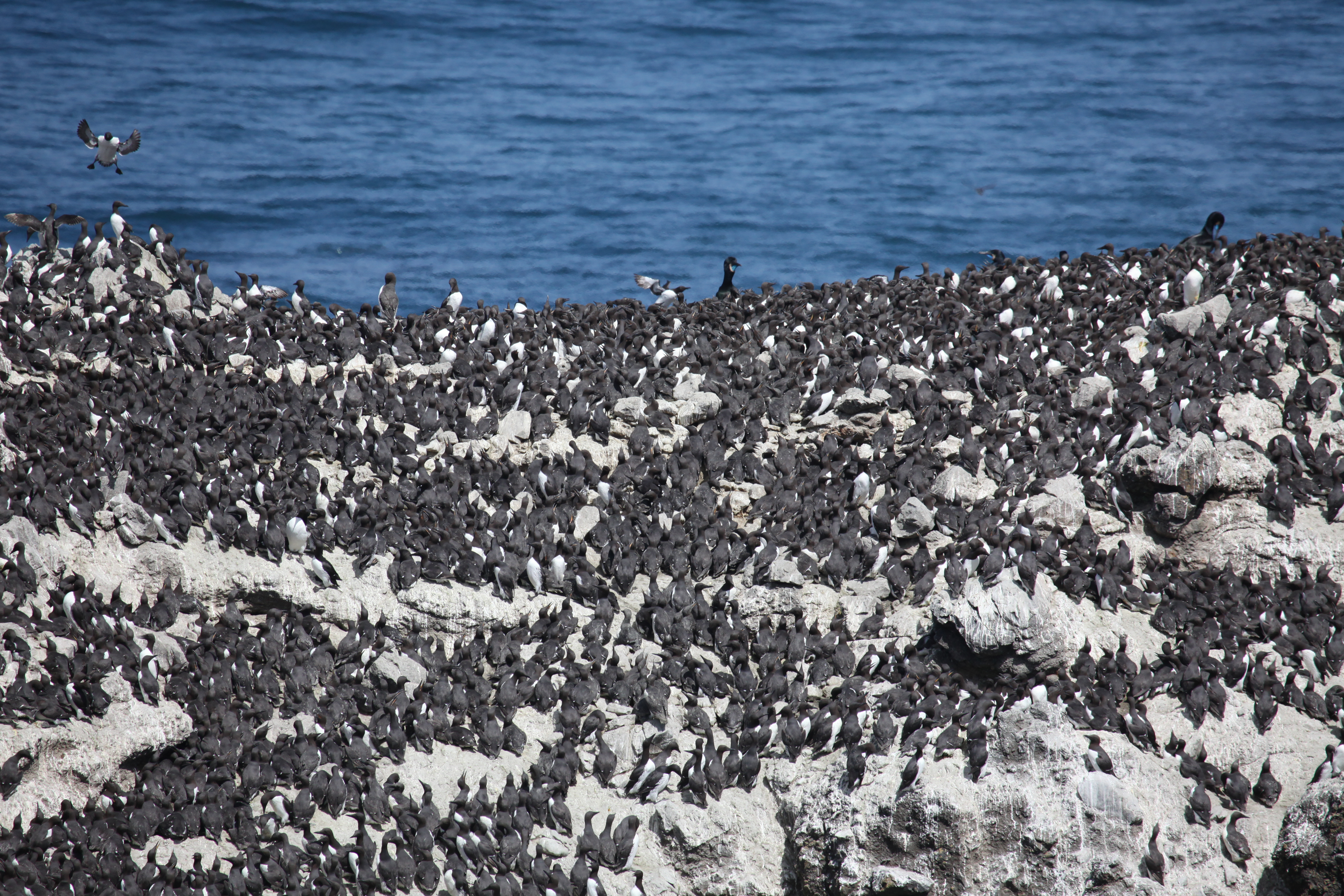 The Common Murre is Oregon’s most abundant nesting seabird—more than 700,000 flock to our rocky coasts in spring to breed. They raise their chicks on rocks and cliff ledges in colonies of tens of thousands of birds. Colony Rock boasts the largest number of Common Murre; view them from Yaquina Head Outstanding Natural Area in the summer. You can also see them from Coquille Point in Bandon and Heceta Head and Cape Meares State Scenic Viewpoints. Learn “murre” about these gregarious seabirds. 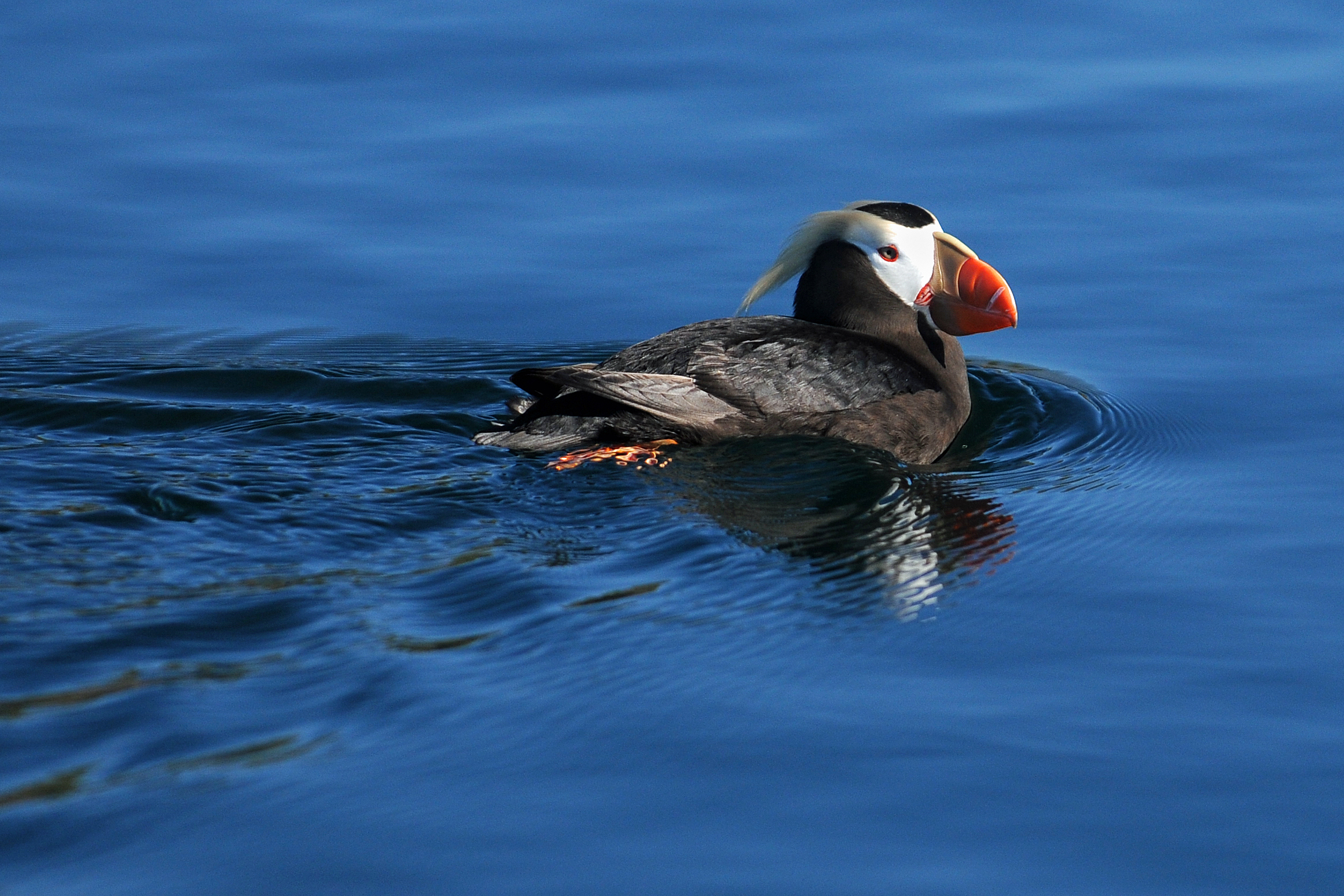 The tufted puffin easily wins the title of “most-wanted bird to see” among nature enthusiasts visiting the coast of Oregon. Known to some as “parrots of the sea,” these charismatic birds return annually to a few nesting islands on the coast. Viewing locations include Haystack Rock at Cannon Beach, Face Rock in Bandon and Goat Island at Harris Beach State Park. 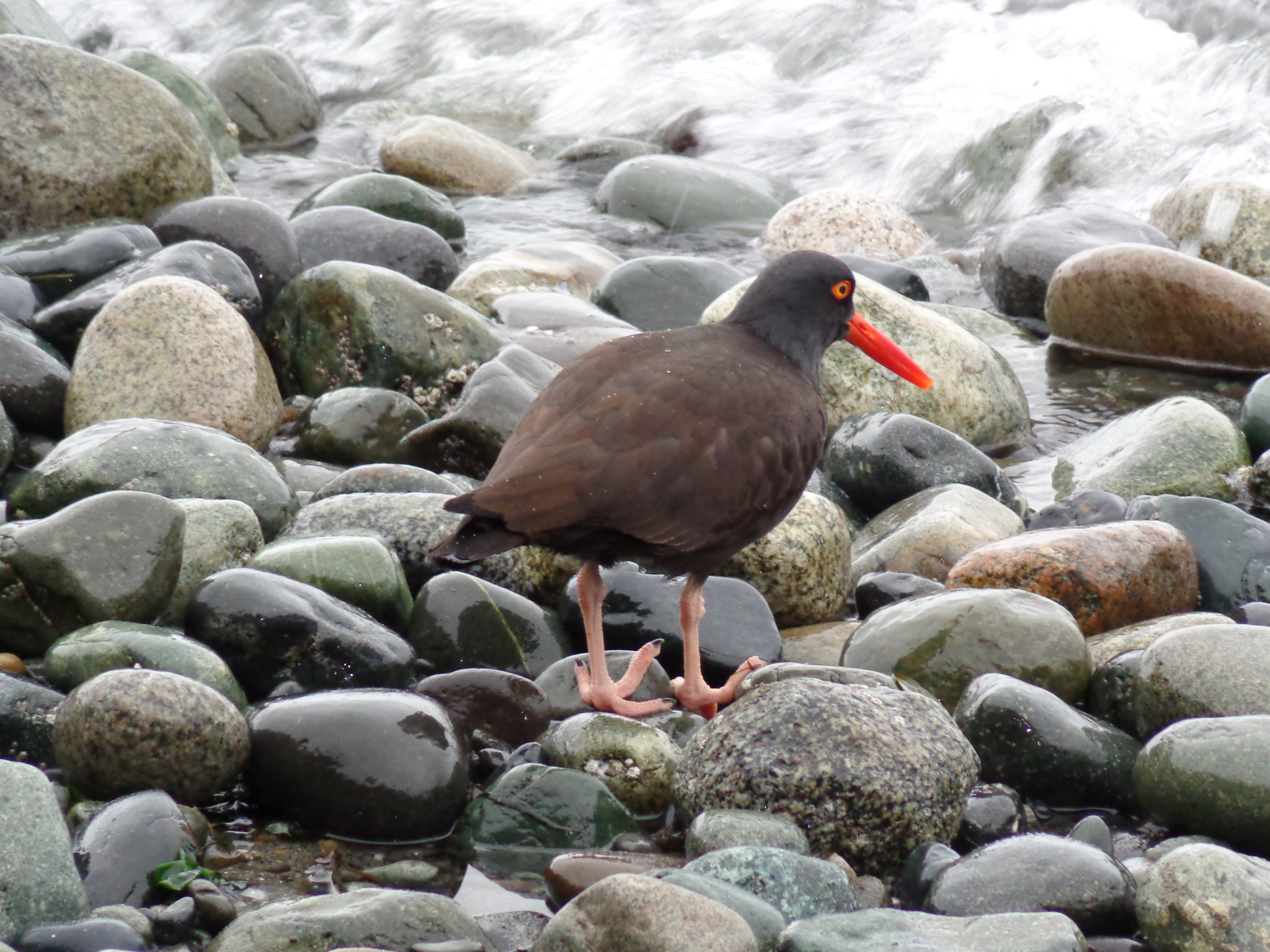 Often found poking around rocky shorelines in the intertidal zone, black oystercatchers are a chatty, vivacious presence. Despite its name, this vermillion-beaked shorebird catches not oysters but mainly mussels and limpets for food. Black oystercatchers nest just above the high-tide mark on beaches and slopes in areas where prey is abundant. Outside of the breeding season, look for flocks of these unmistakable birds foraging on our coast. 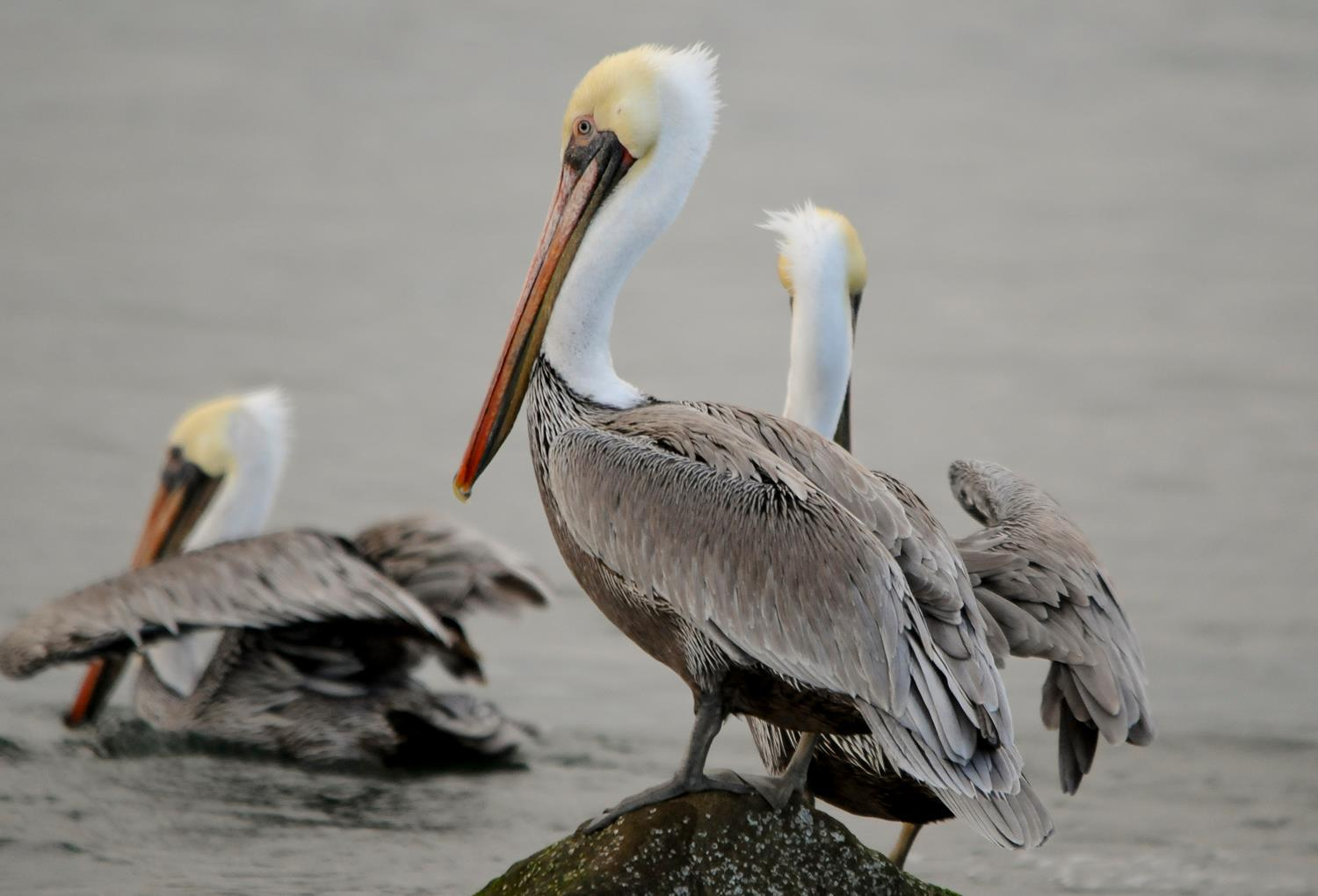 California brown pelicans are huge and unmistakable visitors to the Oregon coast, stopping by on their migration to and from winter breeding grounds in southern California and Mexico. Since breeding occurs from January to May, many pelicans spend the summer months “wintering” here afterward. Watch their spectacular sidelong dives into the water for prey, using their famed 3-gallon throat pouches as scoops. Only one other pelican (the closely related Peruvian species) feeds via plunge-diving—the rest of the world’s eight pelican species employ less daring tactics. Look for low-flying squadrons of Brown Pelicans gliding in formation over the Pacific, wingtips nearly brushing, undulating gracefully above the waves. 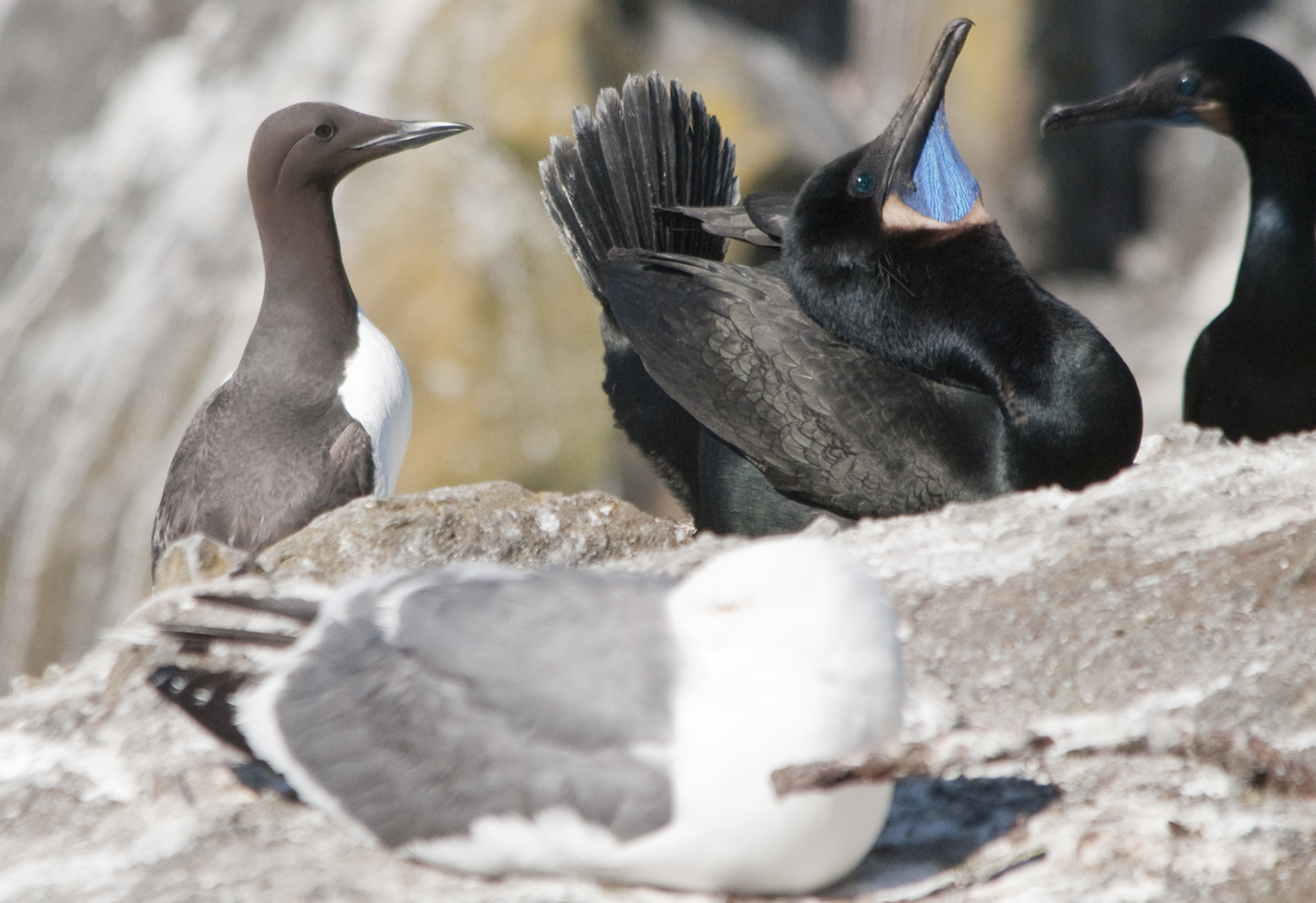 Brandt’s cormorants are one of three cormorant species found regularly on the Oregon coast. Distinguished by a comparatively short tail and blue throat in breeding season, they nest colonially on rocks and headlands and are the most common of the cormorants on the Oregon coast in the summer. Like all cormorants, their feathers are not waterproof—this decreases their buoyancy, making it easier for them to dive for fish. Brandt’s Cormorants can be seen from April to August at Yaquina Head Outstanding Natural Area, Heceta Head State Scenic Viewpoint, and Coquille Point.

The most abundant cormorant species throughout Oregon. Found in both fresh- and saltwater habitats, Double-crested cormorants get their name from the jaunty white plumes sported by breeding adults. Most of the year, these birds can be identified by their yellowish cheeks and lores—the area between the bill and eye. Watch for them perched on rocks and dock pilings, wings outspread to dry in the sun.

In an area teeming with gulls, the pink-legged, slaty-backed western gull is coastal Oregon’s most abundant. Proper identification takes uncommon patience and skill, as well as a fondness for minutiae. Confusing matters further, western gulls hybridize easily with several other gull species—the intergrades can be all but inscrutable. Western gulls are opportunistic and rapacious feeders, often preying on the young of other nesting seabirds.

Leach’s storm-petrel is a roughly robin-sized, narrow-winged pelagic bird, rarely seen near shore outside of breeding season. Fifteen offshore rocks within Oregon Islands National Wildlife Refuge are breeding sites for this colonial, burrow-nesting species. The smallest pelagic breeding seabird in Oregon, Leach’s storm-petrels will fly more than 100 miles offshore to feed on shrimp, fish and squid. They return at night to regurgitate food for their chicks, using a well-developed sense of smell to locate individual burrows amidst the colony.

These are one of Oregon’s rarer breeding alcids—the family of superficially duck-like oceanic birds that come to land only to nest, typically in colonies. During the breeding season these seabirds grow a vertical horn-like structure at the base of the upper mandible, hence the name. Closely related to the puffin, the rhinoceros auklet likewise feeds on sand lance, herring, anchovies, and smelt. They feed offshore during the day and return to the colonies at night to avoid predation by gulls. Rhinocerous auklets can be seen breeding in the Sea Lion Caves south of Cape Perpetua.

Like the rhinoceros auklet and tufted puffin, Cassin’s auklets dig burrows for their nests, typically 2 to 6 feet long. This small, chunky, blue-legged auklet is the only known Northern Hemisphere seabird that can raise two broods in a season. They spend the winter at open sea and are the most common alcid seen off the Oregon coast. Despite this, not many Cassin’s Auklets breed here—there are less than a dozen sites and fewer than 1,000 nesting birds.

Unique among alcids, Marbled Murrelets are solitary nesters in an unusual habitat: coastal old-growth coniferous forest. Nests are made in trees up to 250 feet high in groves up to 30 inland. They dine on typical alcid fare, though: small fish and krill. It was not until 1974 that the first Marbled Murrelet nest was discovered, and as of the late 1980s only 10 nests had ever been seen worldwide. At sea, marbled murrelets can be found during breeding season at Boiler Bay in Depoe Bay, Yaquina Head Outstanding Natural Area, and Cape Perpetua Scenic Area.

Marine wildlife are extremely vulnerable to changes in the ecosystem, both natural and human-caused. Major threats include:

Be part of the solution

When walking the beach or exploring the rocky intertidal

Whether by land, sea or air, human disturbance can be disastrous to seabirds and it is against the law. Even relatively minor commotions can force the birds to expend precious energy that can reduce their reproductive success and survival. Low flying aircraft and close approaching boats can disturb common murre, causing them to fly from their eggs or chicks. This disturbance leaves eggs and chicks exposed, allowing gulls and ravens to take advantage by eating them. Marine mammals will also flee their colony site if disturbed, often leaving pups behind and in some cases crushing them during their escape.

Effects of disturbance can include (in order of severity from least to worst):

Be aware of the wildlife around you. If birds are behaving nervously, you are too close. Signs of distress include head bobbing, excessive calling, and fluttering. If a bird is dive-bombing or appears to have a broken wing, it is trying to lure you away from its nest. Watch your feet and move carefully away.