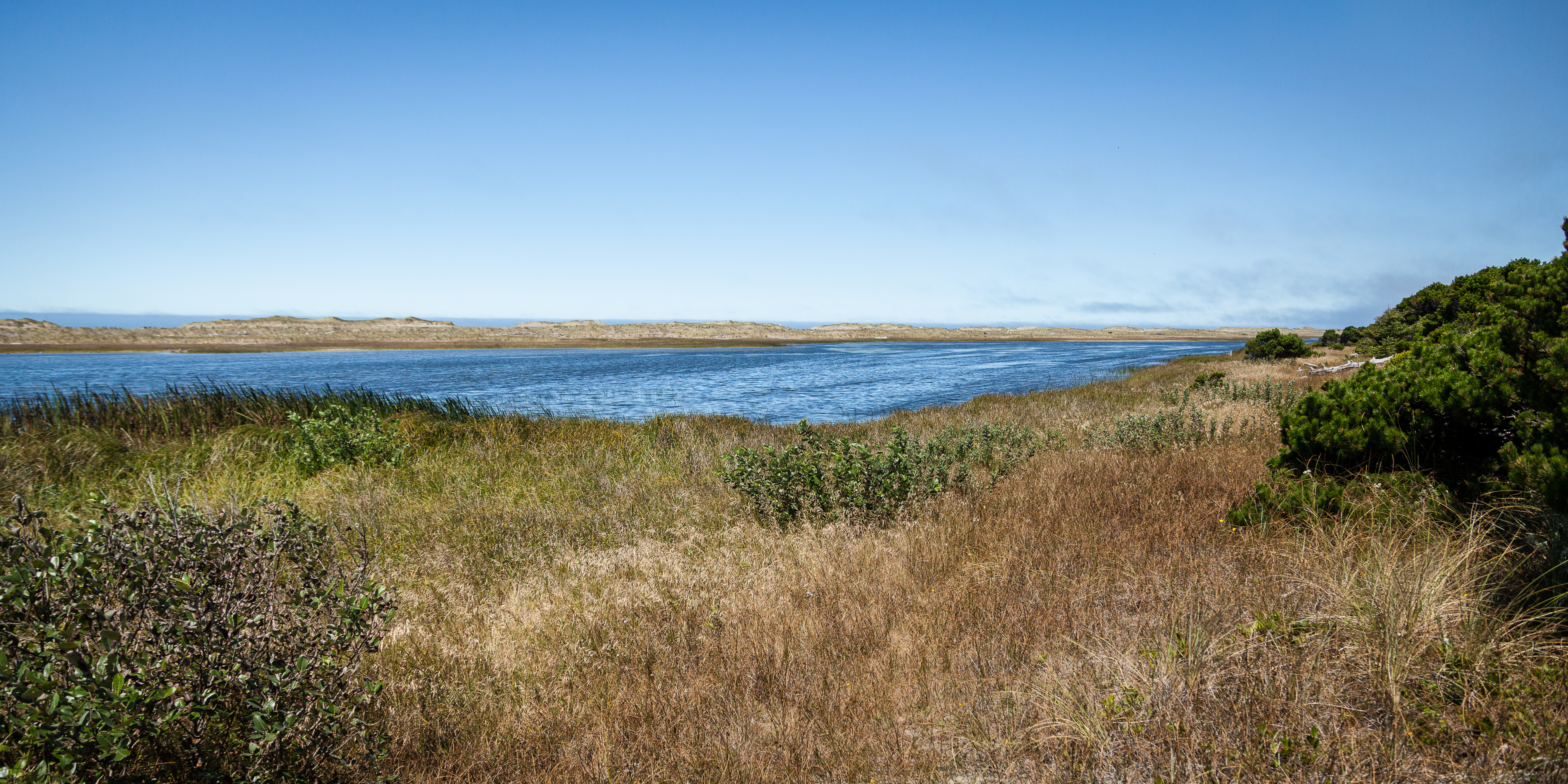 Geographically, the New River must be one of the oddest waterways on the Oregon Coast, steadfastly defying the eternal riparian imperative to merge with the closest downhill waterway until reaching the ocean. Jims Creek seems to follow the traditional course, meandering into the area from the west clearly looking for the Pacific. Willow Creek joins Jims just over a mile from the beach, also looking for the quickest way to the ocean. Finally, Floras Creek, the north-flowing outlet for nearby Floras Lake, joins the stream merely a quarter mile from the surf, give or take a high tide. Then, incredibly, this trio of waterways turns sharply north, becomes the New River, and wanders for about 9 miles on a north course parallel to the Pacific before it finally swerves into the surf.

The river may have been formed by a high water event in 1890, when a raging Floras Creek skipped a turn west to continue on its push north, carving a new channel behind an existing bank of dunes. Beach grass was introduced in the 1930s, and the shifting sand barrier that may have temporarily separated the new river from the ocean became more of a permanent wall. Currently there are several breaks in the dunes where the New River can reach the ocean during higher flows, but any dune shift that might have normally filled in the Floras Creek channel over time has been arrested by beach grass.

Regardless, the river pushes through a very unique area that sees traffic from a wide variety of wading and migratory birds. Designated an Area of Critical Environmental Concern by the BLM, the New River and the surrounding zone have been recognized as irreplaceable habitat for several rare species of flora. A newly remodeled learning center at the Storm Ranch access is a fantastic resource to help educate visitors about these and other notable species in the area. The best way to follow up that education is with a tour of the Storm Ranch trail system.

While there are several trails available, the loop consisting of North Trail, Ocean View Trail, West Muddy Lake Trail, and East Muddy Lake Trail is approximately 3 miles, very doable for family members of all ages, and highly recommended. The road to the boat ramp bisects the loop, so a return shortcut is always close by. If you have a little extra time and energy, check out the Old Bog Trail for a glimpse into the history of the local cranberry industry.

The New River is also open to boats, though motorized access to the ramp is closed from March 15 through September 15. Because the New River drops only 10 feet per mile over its entire length, there-and-back paddle explorations are another great option for exploring the area when water levels allow for it, and the boat ramp at Storm Ranch is an ideal access point.

Once you’ve finished exploring the Storm Ranch side of New River ACEC, stop off at the Floras Lake access for a hike or some wind and water sports, or camp at nearby Boice-Cope County Park for an extended stay.

Note that areas in the Bandon State Natural Area, New River Area of Critical Environmental Concern, and around Floras Lake are considered nesting habitat for the western snowy plover; dogs and other specified recreational activities are prohibited in certain areas between March 15 and September 15 to accommodate nesting and encourage the recovery of this threatened species.