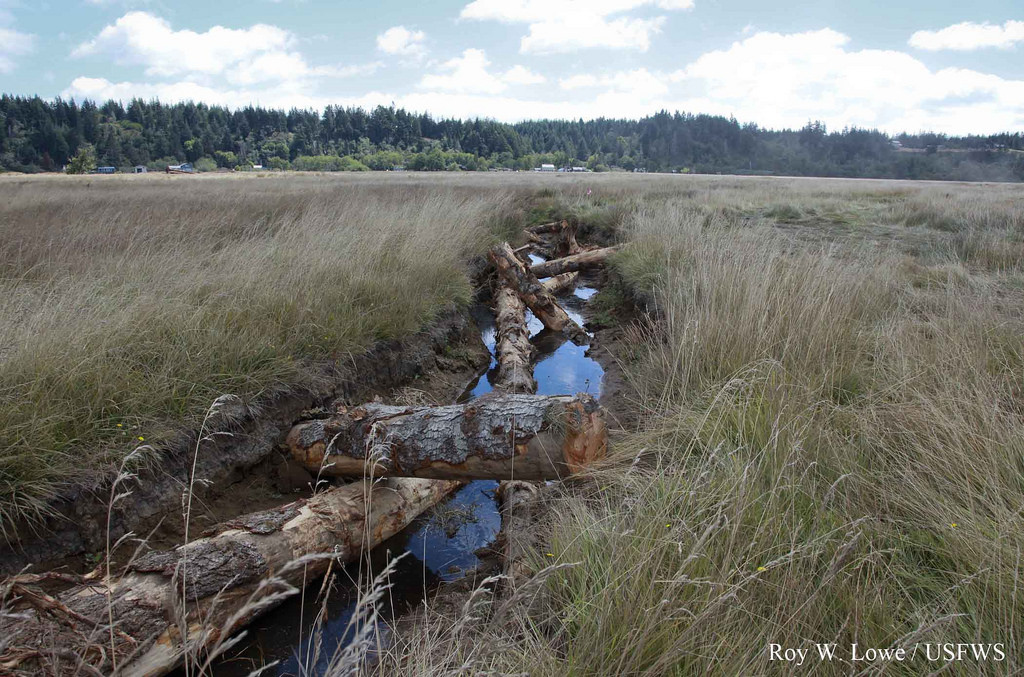 For centuries both people and wildlife have flourished at Bandon’s Ni-les’tun Marsh amid geologic and human-induced changes. Twelve times in the last 6,700 years earthquakes shook this coastline and triggered gigantic waves called tsunamis; the last such temblor and resulting seiche, in 1700, scoured the shore and lowered the entire Coquille River delta by half a foot. More than a century later, enterprising settlers drained vast stretches of the marsh, diking off the tidal influx to create pastureland. Today, the marsh is refuge land. And after the U.S. Fish and Wildlife Service completed the largest tidal marsh restoration in Oregon’s history here, in 2011, the estuary was radically altered once more—this time with the intent to sustain fish, wildlife, and people alike by letting natural processes take precedence.

Buried in the marsh lie clues to how humans made—and continue to make—a living here. Archeologists have unearthed 300- to 3,300-year-old western hemlock stakes preserved in the waterlogged soils: remnants of weirs, barricades set across tidal channels to trap fish. The estuary at large has been inhabited by Coquille Indians and other members of the Confederated Tribes of the Siletz for untold generations. As the tidal channels shifted, they extended or built new weirs, chasing the coho, Chinook and steelhead salmon runs. Their lifestyle was as dynamic and resilient as the latticed fishing weirs still woven today by tribal members living on the southern Oregon coast.

In contrast, settlers in the late 1800s used their engineering skills to alter the marsh for agriculture. Salt marsh, to them, was untapped opportunity: fallow land that, after much earthmoving, could eventually show promise. They built earthen dams along the river edge and installed tide gates to prevent flooding. They dug ditches to drain wetlands for dairy cattle pasture. However, draining wetlands decimated the tidal fish and wildlife habitats. Fewer than 500 acres remain of the 5,000 acres of tidal wetlands that once lined the Coquille River valley. That’s why the U.S. Fish and Wildlife Service undertook a massive re-weaving of the marsh, so that once again the tides flood the lands twice daily, and the braided channels run anew with salmon and other fish.

How do you transform 400 acres of diked and drained pasture into a vibrant marsh awash with ocean tides and flowing river? You study how a natural tidal marsh works and follow its lead. In 2009, the U.S. Fish and Wildlife Service and more than two dozen partners took the initial steps. They drafted an elaborate make-over plan, drawing on local hydrology patterns, data on former habitat and inhabitants, and aerial photographs of comparable-yet-unaltered estuarine systems. They dug a series of curved channels—some following historic routes—and used the soil to fill in the irrigation and drainage ditches. In 2010 they finished excavating the 2 miles of tidal channels. They added logs to provide hiding places for fish. For the finale, they removed the tide gates and dikes that kept the Coquille River at bay. After two years of toil and around $9.5 million dollars, the make-over was complete. At least, as far as human legwork was concerned.

Once again, the tides ebb and flow across the marsh. Once again, juvenile coho salmon from the upper Coquille River watershed swim up the channels to find quiet waters rich in food and shelter. Once again, nutrients arrive with the tides, fertilizing vegetation and sustaining the mud-dwelling creatures: clams, worms, shrimp and many others. With time, the marsh will become ever more complex and fecund. Nature—the river’s meander, the tidal pulse; the sedges and tufted grasses and Baltic Rush overtaking pasture species; the siltation and decay, nutrient cycling and regrowth—will take its course.

Now that the Ni-les-tun Marsh restoration is complete, just about all that’s left to do is wait. The natural processes that build marshes and shape estuaries are gradual, incremental, all but imperceptible to the daily observer. But now, at Ni-les’tun, they’re inexorably underway.

What ingredient helps make a salt marsh one of the most productive ecosystems on the planet? Decay. The marsh is chock-full of decomposing vegetation that supplies nutrients for the entire marine food web. For prodigious decay, start with a lush array of vegetation. Here, sunlight-sans-tree-canopy fuels the growth of phytoplankton, algal mats, and vascular plants in profusion. The Coquille River washes in natural fertilizers and sediments from upstream, while incoming tides bring additional nutriment—both actions stir the estuary’s waters, aerating the substrate and its lodgers. Each element conspires to foster growth and its subsequent decay.

When the flourishing plants die back in winter, bacteria decompose them into a rich organic soup. Outgoing tides move this slurry into the main estuary, where the Coquille River and Pacific Ocean homogenize. Within the tidal channels and in open waters, amphipods, crabs, snails, shellfish and other aquatic creatures feast on the broken-down plant matter. Those small creatures become food for larger ones out at sea. So on through the trophic levels—all a part of the cycle of life.