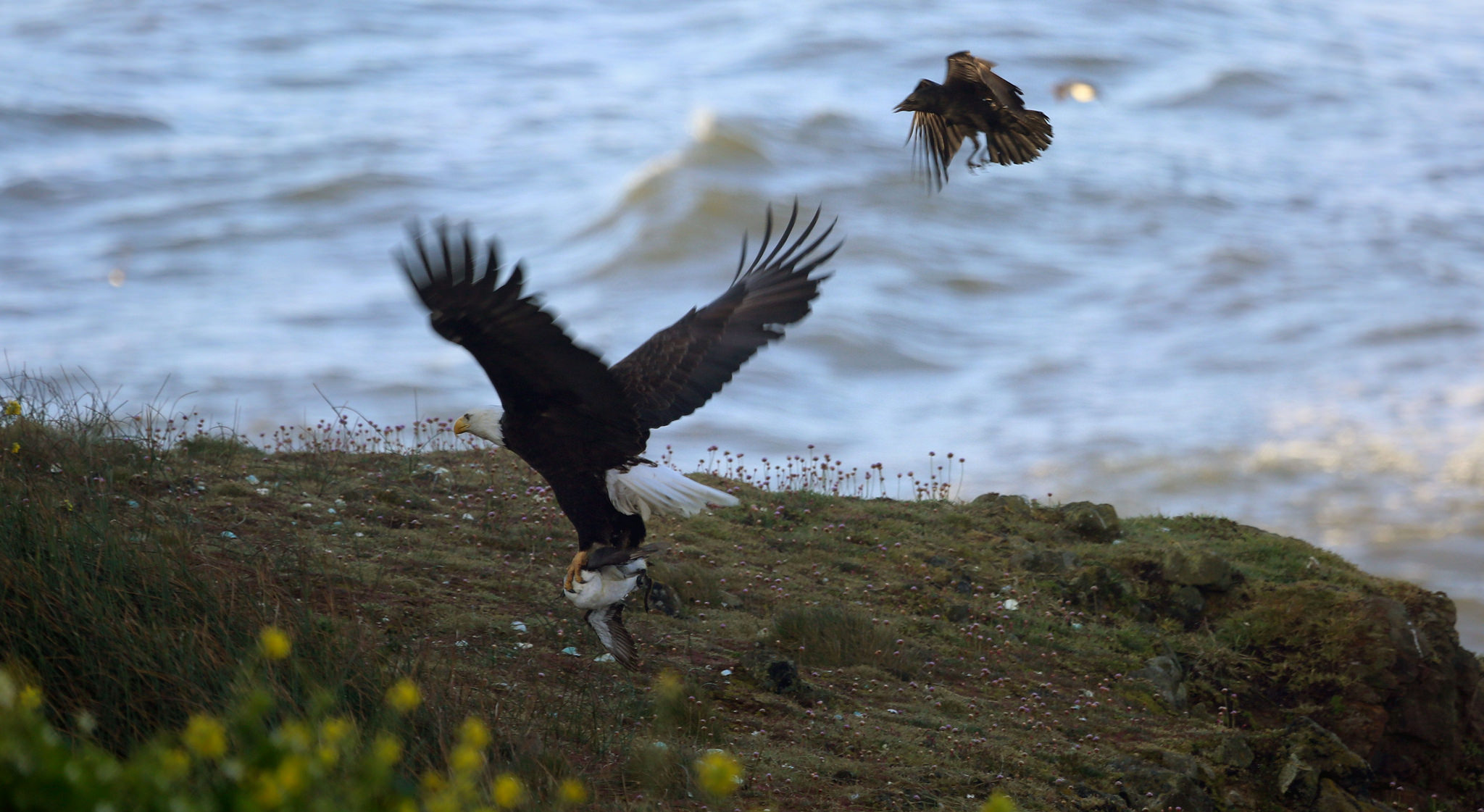 On the Oregon coast,Ā bald eagles (Haliaeetus leucocephalus) are a breathtaking sight and quite popular with beachgoers. Researchers are only now beginning to better understand the effects these striking predators have on fragileĀ bird populations like the common murre (Uria aalge).

Once in decline and listed as an endangered species in North America, the bald eagle has staged a remarkable and welcome comeback. According to the U.S. Fish and Wildlife Service, bald eagles nearly went extinct in the United States due to a number of factors:Ā The clearing of virgin forests resulted in habitat loss,Ā excessive hunting of shore birds and ducks jeopardizedĀ food sources, andĀ the widespread use of the insecticide DDT devastatedĀ the eagle population.

After concerted efforts to ban DDT, prohibit the killing of eagles, improveĀ water quality, and protectĀ nesting sites, bald eagles once again soarĀ across skies and delight viewers with majestic flights and aggressive hunting tactics. The bald eagle population has increased by 7 percent each year between 1978 and 2007 in Oregon alone, which is an extremely successful repopulation rate by any measure. An unforeseen consequence of this robust return, however, is the effect the eagles are having on birds like the common murre, which nest on rocky islands off of the Oregon coast.

The common murre, also known as a thin-billed murre in North America, is a smaller duck-like bird that spends most of its life at sea. Common murres huntĀ for food below the ocean’s surface, and theyĀ can dive to depths of 100 meters in a search for prey. They forageĀ in flocks and breedĀ inĀ dense moving colonies of birds that are typically located high on cliff faces for protection. Common murres onlyĀ access rocky coastsĀ in order to breed, and it is in these unlikely locations that their eggs sit directly on bare rock.Ā The downy chicks typically fledge the nest after around 20 days and can dive for food as soon as they touch down on water. Given the precarious nature of the nesting location, common murre hatchlings are particularly vulnerable toĀ predation fromĀ bald eagles.

According to the USFWS and research performed by Oregon State UniversityĀ associate professor Rob Suryan and graduate researcher Cheryl Horton, āa seven-year survey conducted at Yaquina Head found that, from 2007 to 2010, murre reproductive success–their ability to raise chicks to fledging age–ranged between 55 and 80 percent, even with a few eagles present. But by 2011, as both eagle populations and their predatory disturbance increased near the colony, that success dropped to 20 percent–meaning some 80 percent of murre pairs failed to rear young.ā Drastic reductions in success can have longer term consequences for a population. Fortunately, the common murre has a long reproductive period ofĀ roughly 15 years.Ā

While actual predation is a source of loss, predatory swooping has the most profound impact. With each pass of a bald eagle, frightened murres flee to the water, exposing their eggs and chicks. As bald eagles are not the only predators preying on the colony, birds like gulls, ravens and even pelicans like to attack during the momentary panic. Nesting location adds an additional layer of risk. In a panic, unprepared chicks often race straight off the cliff, falling to their death.

Gulls and crows have been quick to take advantage of the increase in bald eagle attacks on the common murre population.Ā Gulls will alert others of the presence of eagles, increasing the hunting pressure. Even turkey vultures (Cathartes aura) have been seen gorging on common murre nesting sites.

It is unclear whether these interactions are merely a return toward a previously upset balanceĀ or a new and more permanent shift in species populations. It is assumed that murres were preyed upon by eagles historically, but specificĀ data is lacking. As bald eagle populationsĀ increase, it is likely their influence will be felt on other at-risk speciesĀ like cormorants and great blue herons. Sadly, the imbalanced relationships between these predators and their prey is largely human caused, and the fix for this imbalance will require still more human intervention. Wildlife managers are faced with increasingly difficultĀ management decisions regarding how (and when) to manipulate populations to achieve restoration goals. Here they gave such types of games as applications and see online Y8 games, that are played on the devices and gadgets, such as laptops, mobile phones, and other ones. Many of these Y8 games can be found on various websites and some of them are free.

Understanding the complex web of interactions affecting common murre populations poses a puzzleĀ for researchers to attempt to solve. Researchers at OSU are working to better understand changes among common murre and bald eagle populationsĀ along the Oregon coast.Ā Since 2007 there has been aĀ slight decline in the overall common murre population size, while the bald eagle population has increased more than tenfold. Work is now being done to analyze historical datasets to better understand the factors affecting delicate shore bird populations. Scientists have much research to do to fullyĀ understand these predator-prey relationships.

To learn more, check out the following resources: