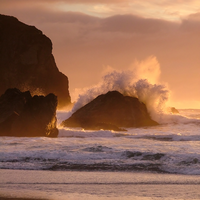 Miles of kayaking trails, crashing waves, crabbing, whale watching and award-winning brews await you at the Oregon Coast this winter. Spy gray whales as they make their annual migration south during the winter months. Try your hand at crabbing, which reaches its peak beginning in December. Join a peaceful guided kayaking trip in Tillamook Bay, and warm up with a beer from one of the Oregon Coast’s growing craft brewery scene. And no trip to the coast in the winter would be complete without watching the crashing waves during a spectacular storm.

Want to win an Oregon Coast Wintercation of your own? Enter to win a trip for two on a guided whale watching charter from Newport Tradewinds, $100 to spend at Rogue Ales and a stay at the Elizabeth Street Inn. We’re even adding in tickets to the Oregon Coast Aquarium, Ripley’s Believe it Or Not, Undersea Gardens and Wax Works, and a couple of bowls of clam chowder at Mo’s.

Read more about some of our favorite Oregon Coast Wintercations.

Do you have a story about the Oregon Coast? Share it with us