To view Susan’s Blog, go to:

Over Halloween weekend Steve and I went to Oregon. (Steve is a genius with on-line airline arrangements and managed to cash in a “companion ticket”…..basically, a free flight for me….when booking an incredibly good deal for himself.) We went to see a new part of the country….to relax….to explore….to take photos….drive through Redwood forests….play in the sand….and visit a few cemeteries along the way. We did all this and more!

One of our first destinations was the Oregon sand dunes. We really didn’t understand just how vast this area is. There are plenty of access points, parks, trails, and places to wander around in amazement. We stopped at several including the John Dellenback Trail. The photos here are all mixed up between the various locations….which doesn’t really matter. Each spot was gorgeous. We didn’t have time to rent an off-road vehicle….but it was a very, very tempting thing to do!

Above: We hiked along the forest trail at the John Dellenback Trail until it opened onto the acres and acres of sand. At this point, we were two full miles from the ocean beach. One could certainly get lost out here!

Above and below: More dune photos! It was hard not to snap the camera in every direction. As a matter of fact, I made a video. It isn’t particularly good…but it does show a 360 degree view from a single vantage point.

The landscape looks almost like an alien planet….changing from mountains of clean sand to patches of wild brush.

The weather couldn’t have been more beautiful.

Above: Steve on one of the sand dunes.

Above: The perfect day…..almost an abstract composition!

Above: Steve and the sand dunes.

Above: I couldn’t resist….and made a “sand angel”. Of course, this might have been when sand got in my camera. I’ve had difficulties getting the lens to expand and contract correctly and the shutters don’t always open completely…..but it was worth it!

Above: Steve is about to climb this “sand mountain”. My footprints are showing him the way!

Above: Steve is trying to climb up beside my tracks!

Above: Steve has “made it”….our tracks are behind him!

Above: Our nearly parallel tracks up the “sand mountain”.

Above: If you look at the “sand mountain”….which in reality is more like a “hill”….center and slightly to the left…..you’ll see our nearly parallel tracks! This place is huge! 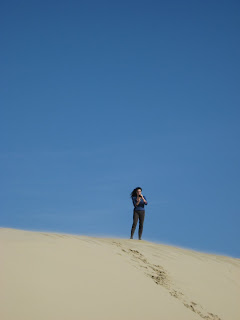 ….I took photos of him! I love the one above and might get it printed as a “real photo”!

Putting Steve into pictures really helped with the sense of perspective!

After exploring the dunes, we headed to a quaint cabin at Ireland’s Rustic Inn in Gold Beach, Oregon.

Above is a view of our cabin….totally cute….everything was vintage Americana and it came with kindling and logs for the fireplace too!

Above: Me in bed!

We a fabulous dinner in a nearby restaurant. I ate skate….yes, like a sting ray! It was delicious…reminded me of scallops, which I love!

Ireland’s Rustic Inn also has a beach side “spa” area with outdoor hot tubs. This is a hideous photo…..but….exactly what one would expect of a snap shot taken literally at arm’s length with a flash going off directly into ones’ faces! We might “look” terrible….but we had a blast!

Gold Beach has a nice, little, historic cemetery….called Pioneer Cemetery. I scribbled down several epitaphs and took some photos. Then, we headed down the southern Oregon coast.

It was glorious…..yes, that’s our shadows on the beach below!

For Halloween night, Steve booked a tree house at Out ‘n’ About Treesort outside Cave Junction. It was hilariously fun to stay in such a unique place.

We walked on all the rope bridges…some over 30 feet in the air. I took another video….this one with Steve on a rope bridge. Like the other video, it’s not particularly “great”….but short and gives a sense of this unique place.

We stayed in the Peacock Roost which just happened to be the oldest of the tree houses.

It was a perfect place for Halloween night. I also tried out the rope swing. Steve took a video….which is better than my other videos…..of me on the swing!

That night we had local microbrews and pizza. It was fantastic!

While at the Treesort, I learned that there was an even older, historic cemetery in the former town of Waldo. Waldo was a gold mining town that went “belly up” years ago. In attempts to find any remaining gold dust, people literally took the town apart over the years. Now, there’s nothing left….and I mean NOTHING….except the tiny cemetery. One of the nice people, the arborist at the Treesort, knew how to find this cemetery….”Turn left off the road by the gravel pit, take the center trail, go past the patch of trees and around the bend and over the hill…..” There was no way to get there….until he took us!

The cemetery was there….in the middle of NOWHERE….and yet someone tended most of the graves. There were flowers on most of the markers. Crayons were placed on the sites that had been for infants and young children. Someone was still watching, caring, and coming. Someone remembered. I found this place quite special.

From Cave Junction, we made a trip to the Oregon National Caves Park. The tour was fantastic. We even saw a few little bats and spiders….coming inside for the winter.

Above: Crater Lake….a crystal clear view, six miles across on a most beautiful day!

On our last day in Oregon, we drove to Crater Lake National Park. There is nothing to prepare oneself for the natural beauty of this amazing place. The road just winds through the forest, ever climbing. The vegetation thins out to roughed trees. There are no quick glances out the car window….no “peeks” through the trees with a glimpse of the lake. Then you arrive. The view hits with its full impact. Our jaws dropped. This is truly one of the most magnificent places on earth.

Above: The water is amazing. This is a view down the steep, interior cliffs of Crater Lake’s rim…directly into the calm azure water….with a reflection of the blue sky dotted with puffy white clouds. We couldn’t take a bad picture in any direction.

Above: This is a view to the northern rim with its steep slopes reflecting in the water.

Above: We walked away from the visitor’s center for this spectacular view. We took another video….nothing really does this place justice though!

Above: Wizard Island. Crater Lake was formed after this still active volcano erupted, blew off it’s “cap”, and the “crater” was filled with rain water over thousands of years. Of course, the volcano continued to erupt (and will eventually do it again….but no time soon). These eruptions formed Wizard Island….which naturally looks like a little volcano surrounded by water.

The drive back to the Portland Airport took us through beautiful forests with spectacular views….like this one of Mount Thielson. The trip was magical.