A Little Sand, A Little Soda, A Little Lime and A Lot of Heat - Oregon Coast Visitors Association

Cities on the Oregon Coast
Home / Stories / A Little Sand, A Little Soda, A Little Lime and A Lot of Heat

A few weeks ago we were on vacation on the Oregon Coast. One of the things that caught my attention was the prospect of looking for and possibly finding glass floats. At one time Japanese Glass Floats could be found along the coast but the chance of finding one now is pretty slim. These floats were used on nets by fisherman and sometimes the float would break off the net and eventually find its way across the ocean to the Oregon Coast. Now a days some towns along the Oregon Coast place modern floats blown by glass blowers from the area on the beaches. They are usually placed between the vegetation line and water. 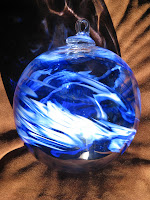 Sometimes they are hidden in plain site or hidden behind beach junk. So on a couple of occasions we took some long walks on the beach and looked for tidepools, sea shells and floats. We found the tidepools and the sea shells but the floats eluded us.

While driving through Newport one day we saw an art glass studio and noticed a sign for glass blowing classes to blow your own float. We didn’t stop that day – we just kept driving to our destination. The next day happened to be a cloudy and rainy day. We did manage to get in a three mile hike before we decided that we had had enough of being wet. So we made a choice to abandon the outdoors and find something to do indoors out of the weather. We returned to Newport and made our way to The Edge Art Gallery. We thought if we couldn’t find a glass float we would make our own. So we went in and inquired about the class. They informed us that they didn’t have a class that day but we could come back the next day. Unfortunately we couldn’t make it back the next day. So we decided to look around the gallery and maybe just buy a float. Then we were completely surprised – they decided to make the time for a class just for the two of us. Now that’s what I call customer service and good business. Going out of your way for the custormer – what a novel concept. 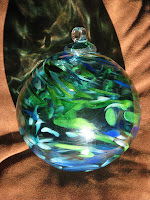 We read a brief safety letter and signed a consent and then the instructor took us back to the studio. The instructor’s name was Jeff. A young man who was very pleasant and went out of his way to make this experience a great one. He turned out to be an excellent instructor and he managed to make us feel relaxed while we handled molten hot glass. The first thing he did was explain the process from beginning to end while demonstrating each part. Then it was time for us to begin. We first got to choose our colors. I picked three different greens (one that was a little iridescent) and one blue, Thomas picked a bright blue and white. I made my float first and then Thomas made his. The steps were the same for both floats so I will just go through them once.

Jeff picked up a glob of glass from one of the furnaces and then turned the blow pipe over to me. I had to keep turning the blow pipe so that the glass didn’t just fall to the ground and to keep the glass in a crude ball. Then I had to put the glass into another furnace to heat it up. Once it got hot enough I took it over to a table where Jeff had spread out little chips of glass – these chips were the three colors of green that I had picked out. They were mixed together and I just rolled the hot glob of glass through the chips until the entire glob was covered. Then I reheated the glass and again rolled it in the chips. This was done four or five times. All the while I kept the blow tube turning and the glass centered. I reheated the glass in the small furnace and then took it to a bench. I sat on the bench and rolled the tube on the supports to keep the glass centered while I took a large pair of scissors and stabbed the glass and twisted it. This was done to create swirls with the color. I did this three times – heating and twisting then Jeff took the blow tube and went to the large furnace to add more clear glass over the green color. He returned it to me and I reheated it and then went to the table with the colored chips – this time Jeff had spread out the blue ones and I rolled the glass through the chips only adding minimal color. I rolled the glass on a flat table to smooth it out a little and give it a little shape. Then the glass was heated up again and then it was back to the bench to twist the color again. After two times of this I heated the glass up and then Jeff blew a bubble into the glass to get it started. Then he reheated the glass and I sat at the bench with a wooden form while Jeff placed the glass into the form and shaped it. Then we switched places and Jeff attached flexible tubing to the blow tube. He kept the blow tube rolling on the supports to keep the shape while I blew into the tube to expand the float to the size I wanted. At the same time Jeff used scissors to make a weak spot on the glass just before the tube so that it could be separated from the tube. He then held the glass over a padded bowl and I tapped the tube with a wooden paddle and the float separated from the tube and fell into the bowl. Jeff added a loop to the top so that the float could hang. He then transferred it to the annealer to cool.

It was an incredible experience even though we had tons of help. I really enjoyed our time learning to blow glass and I have a new found respect for the artist that create wonderful works of art with glass. We didn’t get to see the finished pieces because they had to be transferred to the annealer so they wouldn’t crack. We left the studio with terrific memories but without our floats. We decided to have them shipped home and we would have to wait to see them. Yesterday we were surprised when they arrived in the mail. They aren’t exactly perfect but that is part of their beauty and we have a great souvenir of our time on the Oregon Coast.

To visit Mark from Santa Fe’s Blog and read more of his stories visit http://myjournalofrandomthings.blogspot.com/2009/11/little-sand-little-soda-little-lime-and.html